This year Greenhill celebrates an important milestone, our 40th Anniversary. To celebrate we took "Greenhill on the Road" to Seagrove on Saturday, April 5th.  With a group of about 20 "on-the-roaders", we took a day to take a tour of the North Carolina Pottery Center, David Stuempfle's Kiln, and concluding our day with lunch and a tour of Fred Johnston and Carol Gentithes studio.

Starting at 10am, we met at the North Carolina Pottery Center with a tour led by Lindsey Lambert.  Lindsey took us through the Center to talk about the history of Seagrove and its potters, the communities involved, as well as discussion of style and techniques. Here we were able to gain an understanding and introduction to Seagrove, and understand the transformation that has occurred in the practice of making pottery, and how the work of Seagrove potters adapted during times of progress in the creation of other materials for storage (i.e. plastic water jugs, glass and aluminum.) They had an exhibition of work of students from Seagrove Elementary School who applied for their educational program.  Students learn the basics of traditional wheel turning, hand building and glazing along with the history of the area.

Our next visit was to David Stuempfle's. Driving down the long winding dirt path to his home and kiln, you feel like you are in another world; not just 45 minutes outside of Greensboro.  As we stepped out of our cars, we were greeted by three of David's dogs, and the chattering of Guinea Hens in the brush.  David introduced us to his two kilns.  The original kiln was built in 1992 and is a tunnel-type, cross-draft kiln. While he still uses this kiln, he gets more use out of the kiln that was built in 2010, which is a flame-shaped Anagama kiln, a single-chambered, wood-fired kiln.  Anagama's were first developed in China, moving to Korea then to Japan. David settled in North Carolina in the late 1980's.  He took a couple of trips to Korea then spent six months in Japan,  where visited all of the famous pottery villages (20+), made several kiln-loads and absorbed the influence of that country's ancient art. Now he uses this for inspiration in his design, firings, and even has a wheel from his friends from this area. 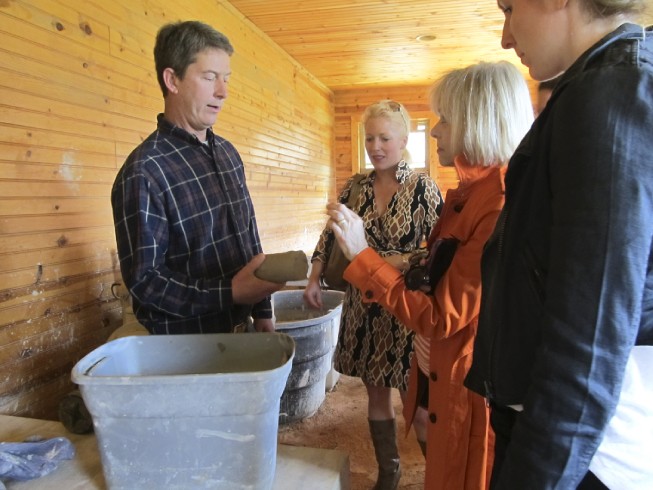 David Stuempfle (left), Seagrove potter, showed the gropu his process to make clay, and examples of the end products. 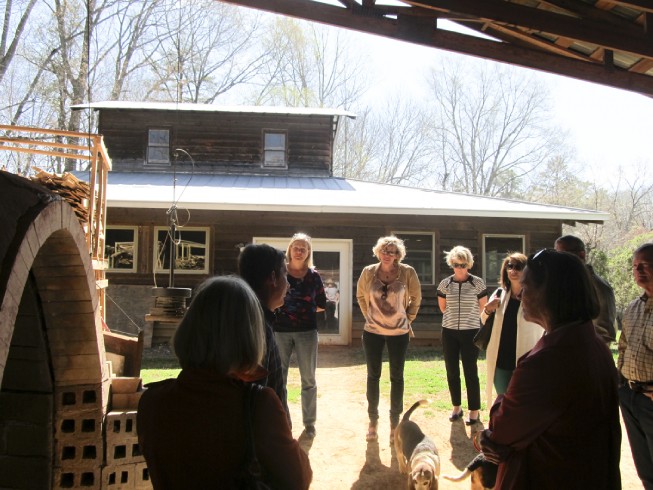 The group asked questions about the aesthetic that the wood-firing imparts to the pottery and the incidental deposits of ash; there is a strong amount of unpredictability to the end coloration occurring during the firing.  Later, we walked through the area where David throws his pots, where he explained his process from digging to the clay, to the finished product. His work ranges large to small, and we discussed the differences of the work; how smaller work, like a mug that you drink out of, will make you feel differently than an extremely large piece - the intimacy versus the grandeur. For the base of David's larger pots he uses a potter’s wheel to start, the uses a coiling technique to build on the base. He likes to use the same style and experiment using different variations of the heights of things because he enjoys experimenting with the heights; which he did say makes it easier for the "consumer" to find the perfect piece that fits for them. 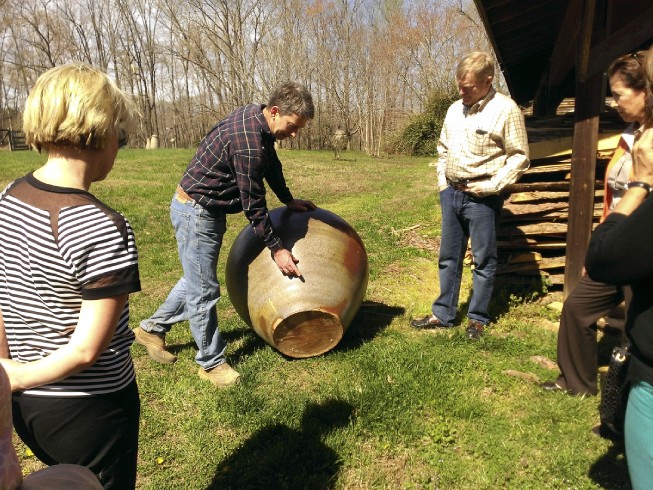 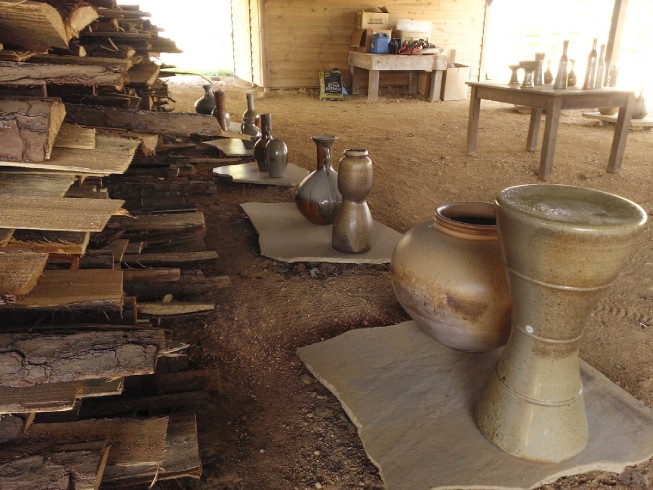 Our trip concluded at the studios of Johnston and Gentithes and where we ate a picnic lunch that was catered by The Table in Asheboro.  Fred Johnston and Carol Gentithes have very different type of techniques, but both had plenty of personality. Fred's work is based on more the more traditional North Carolina pottery traditions with his inspiration coming from many cultures. Depending on the effect he wants to achieve, Fred uses gas, electric and wood kilns to fire his work- but mainly using electric or gas.  He is more influenced by abstract art, and he gains his inspirations come from traveling including a trip to Barcelona that he and Carol had just returned from. 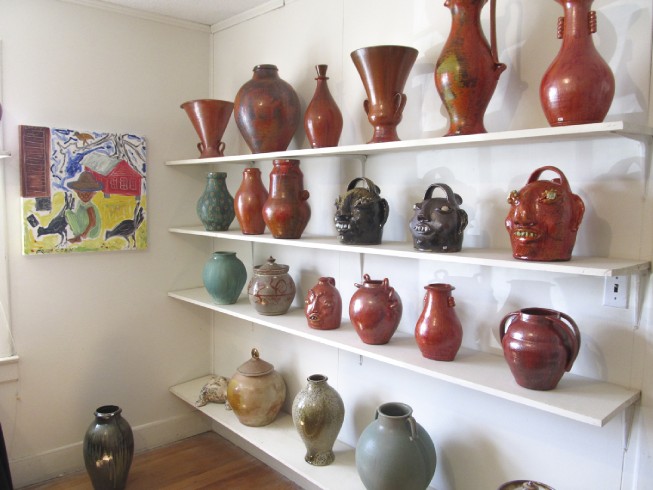 Carol's work has a collage feel to it.  Carol is best known for her quixotic sculptures, an embodiment of the complex nuances within nature and humankind. Abstracting from mythology, literature and life's observations, her subject matter ranges anywhere from conceptual ideas to political commentaries. She had sculptures of lemurs, frogs - and uses a process with newspaper to transpose and reapply the patterns to her work. 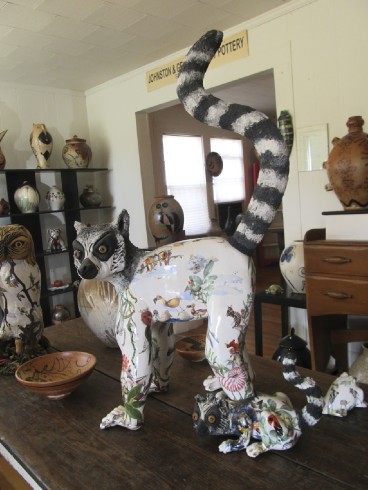 Some of Carol's work in the studio. 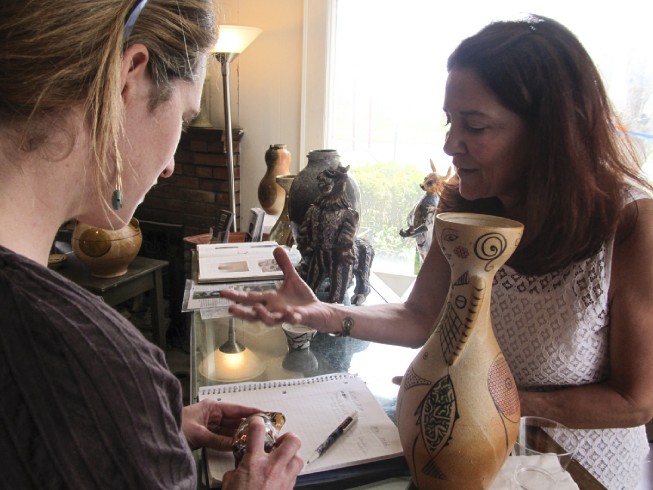 I asked for some opinions from the group - what people learned or what compelled them.

Lindsay Jones, a fellow Greenhill-on-the-roader and Greenhill's Board Chair to give me her feedback of the trip, "I can’t believe that after living in NC for over 30 years that I’ve never made it to Seagrove!  The NC Pottery Center gave a wonderful overview of the history of pottery in this community.  The journey of David Stuempfle and how it has influenced his works is amazing, much like his work!  Fred Johnston and Carol Gentithes both have pieces that tell such wonderful stories!  Fred has such bold and distinctive pieces, and Carol’s satirical pieces are such unique works of art.  It was great to meet with these artists and get a better understanding of their process.  I will be back to Seagrove soon to see more of this community and continue my new collection of this craft!"

Betsy Craft, another 'on-the-roader expressed what she gained from this experience, "I decided to join the group for the day trip to Seagrove with Greenhill, mainly because Lindsay Jones is one of my closest friends, and I wanted to support her and the efforts she had put forth to get a group together.  Pottery has never been my medium of choice when it comes to viewing in galleries or purchasing for my personal art collection.  However, I was so pleasantly surprised to find my interest in this amazing craft completely change by the end of the day's adventures.  Having the unique opportunity to meet the artists, see their process, and hear the complexities and sensational history of this particular art form truly had me inthralled!   What a perfect example of how an intimate exposure to any art form can be so impressionable on someone!   I have plans to return soon, with my family and children, to share with them such a special place we are so lucky to have....  just down the road!     My husband's father was a potter by trade, before he died at the young age of 42, and so knowing that I now have a better appreciation for his family's history has meant a lot to Philip (my husband), and I know he is excited to share a special day with our family in Seagrove soon."

We have some more events taking folks on the road coming up.  Don't miss out...here's some information to keep in mind:

Upcoming - Greenhill on the Road

Join us a trip to the North Carolina Museum of Art on Saturday, October 18 to visit Line, Touch, Trace and listen to the artists give a talk and tour through the exhibition, followed by Lunch at Iris (NCMA’s Resturant).   Ticket price and information will be avialable soon.  Space is limited - so stay tuned.

Also, This Summer 2014, Greenhill will also plan a family-friendly trip to celebrate our 40th.  More details to come!

More About the Potters

Originally from Gettysburg, Pennsylvania, David began studying pottery in high school, spent many years as a journeyman potter working in different parts of the country and for over 20 years has lived and worked in Seagrove. David is a studio potter; works and exhibits in US, Europe and Asia.  US/Japan Creative Artists Fellowship recipient, NEA/Central and Eastern Europe Visual Arts Fellowship recipient. Collections include the Mint Museum of Art, Shigaraki Ceramic Cultural Park Museum.

Growing up in the rural south, Fred Johnston's origins in clay are rooted in the southern folk pottery traditions of North Carolina. While rooted in the south, Fred draws from many cultures- Greek, Korean, Chinese, Pre-Columbian, European and Mimbres to inform his works and his shapes and decorations are bold, distinctive and imaginative. His work is exhibited globally, can be found in the Mint Museum permanent collection and is published in many periodicals and books.

Originally from the flatlands of Ohio, Carol Gentithes earned a B.A. from Duke University in English Literature and a B.F.A from Alfred University in Ceramics. Carol is best known for her quixotic sculptures, an embodiment of the complex nuances within nature and humankind. Abstracting from mythology, literature and life's observations, her subject matter ranges anywhere from conceptual ideas to political commentaries. Her work is in the Mint Museum permanent collection and also documented in several publications. She has exhibited her artwork nationally and internationally

In 1997 Fred and his wife Carol Gentithes established Johnston & Gentithes Art Pottery in Seagrove, NC where they presently make and sell their work.